The Forest township of Hailey, immediately north of Witney, included Hailey village, the scattered hamlets of Delly End and Poffley End, and, until the late 19th century, Woodgreen and part of West End, which from an early date both physically formed part of Witney. The hamlet of New Yatt straddled the township’s and parish’s eastern boundary with North Leigh, its larger part lying in Hailey.  The township had its own fields from the Middle Ages and its own officers and poor relief probably by the late 16th century, and from the mid 19th century it was usually counted a separate civil parish.  In 1877 it covered 2,879 acres; 60 acres comprising Woodgreen, Hailey’s part of West End, and adjacent closes were transferred to Witney borough in 1898, and, following further urban expansion, another 176 acres in the south-east was transferred in 1932. The loss of 22 acres to Crawley in 1954 and of 3 acres to Witney in 1968 reduced the area to 2,618 acres (1,060 ha.), further reduced to 1,034 ha. in 1985, and to 1,030 ha. (2,546 acres) in 2001. 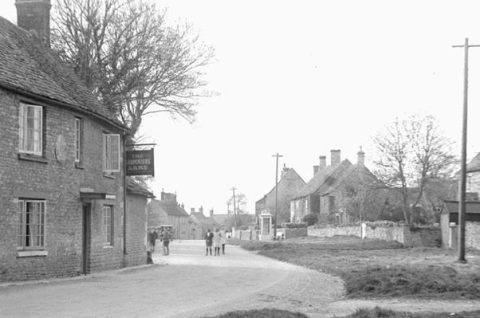 From the Middle Ages to the mid 18th century Hailey inhabitants attended Witney church, an arrangement credibly claimed in 1761 to be ‘incommodious and sometimes almost impracticable’. The same year a chapel serving both Hailey and Crawley was built in Hailey village, on copyhold land given by the Duke of Marlborough and his tenant; it was served by a perpetual curate appointed by the rector of Witney, and had rights of baptism and burial but not of marriage.  A dependent chapel was built at Crawley in 1837,  and in 1854 the two townships (excluding Woodgreen and West End) became an independent parish named Hailey-cum Crawley, served by a perpetual curate who was later styled vicar.

n 1953 Hailey-cum-Crawley’s eastern part, including New Yatt, was transferred to North Leigh,  and from 1982 the rest was reunited with Witney and was served by a team ministry. Hailey chapel retained baptismal and burial rights, together with the right granted in 1854 to publish banns and solemnize marriages.  The chapel at Crawley was closed in 1984.

Hailey’s inhabitants attended Witney manor court and view of frankpledge from the Middle Ages until the court’s abolition in 1925, and by the 16th century collectively paid the court a fixed view of 10s. 6d. twice a year.  A constable and a tithingman for Hailey were elected at the Martinmas view in the 16th century, and still in the 18th;  a hayward was mentioned in the 1590s, perhaps elected, as in the 18th century, at the Hockday court. By the 16th century the hayward held a �-a. close by virtue of his office,  and the field-name Constable’s butts suggests that land was also attached to the constableship.

Despite its proximity to Witney, Hailey remained until modern times a predominantly agricultural area, practising the mixed farming typical of the region. Its distinguishing feature was the large amount of assarted land in the north and east, much of it, from the 16th century, inclosed pasture. From the Middle Ages much of that land was held by townsmen and other outsiders, latterly for sheep-rearing in connection with the cloth and blanket industry, though from medieval times there were also large numbers of resident peasant- and (later) yeoman-farmers, some of whom accumulated sizeable holdings combining open-field arable and inclosed land. Surviving woodland was mostly kept in hand, and was managed by successive lords as part of the Witney estate. By the 17th century significant numbers of inhabitants were employed as outworkers for the Witney blanket industry, though many of them probably lived in the township’s southern part around West End and Woodgreen, effectively in Witney, rather than in the township’s rural settlements. In addition there were the usual rural trades, and by the late Middle Ages there was some small-scale quarrying.

Education and charities of the poor

By will proved 1661 Joan Smith, widow of a prosperous Hailey farmer,  left 40 pounds for educating poor children, which, with another 10pounds left for an annual sermon in Witney church, was used to buy some 1 acre of meadow in Hailey.  A schoolmistress received 2 pounds a year from the endowment in the 1760s, rising to 14 pounds by the 1820s, when the land was administered with Joan Smith’s charities for the poor. In 1824 the Charity Commission ruled that the schoolmistress should receive half the combined income, with 10s. deducted for the Witney sermon.  Eighteen pupils were educated in the charity school in 1802, 28 (14 boys and 14 girls) in 1815, and 30 in 1835, though by the 1820s the endowment supported only 8 boys and 8 girls, the other pupils being paid for by their parents.  Two short-lived dame schools taught another 15 – 17 children between them in 1808, and three in 1833 taught 13 boys and 43 girls, several other children attending Witney National school. All the schools in 1808, evidently including the charity school, taught chiefly reading ‘as far as to the Bible and Testament, with, in some, a little writing’. In 1815 the charity school hoped to adopt the National Plan as soon as a teacher could be found.

In 1847 the charity school, with 45 pupils, was housed in a dilapidated, untenanted cottage in Hailey village. Land opposite, adjoining the Lamb and Flag inn, was given by the Witney banker and brewer John Williams Clinch (d. 1871) and a new stone-built National school was built there in 1848, designed by the incumbent’s brother-in-law William Wilkinson. A government grant met a quarter of the cost. Accommodation, originally for 79, was increased to 108 before 1880, but attendance rose steadily from 73 in 1876 to 107 in 1889,  and in 1892 a new infant room, long demanded by inspectors, was built to the design of the incumbent’s son Clapton Crabb Rolfe, the cost met by a voluntary parish rate.  The school’s parliamentary grant then exceeded 90 pounds a year, supplemented by Smith’s charity, school pence, and subscriptions.  Reports were generally satisfactory, apart from minor scandals involving teachers in 1904 and 1909.

Responsibility passed to Oxfordshire County Council in 1903, and in 1930 the school became a junior school, seniors being transferred to the newly opened Witney Central school. The school was renamed Hailey CE Voluntary Controlled School in 1978. Average attendance in 1939 was 39, and the roll was 105 in 1970, 65 in 1983, and 71 in 1994.  Under a Scheme of 1906 half the combined Smith charities became the Joan Smith Educational Fund, which helped to provide a new playground in 1942 and still paid accumulated funds to the school around 1950. A Scheme of 1977 allowed the charity to support broadly educational activities for recipients under the age of 25. The deduction for the Witney sermon was abolished in 1976.

Charities For The Poor

By a lifetime gift John Smith (d. 1646), a prosperous Hailey farmer, gave 4 a. in Hailey from after his wife’s death, half the rent to benefit widows and orphans in Hailey. His widow Joan (d. 1661) gave half a yardland (probably 10�15 a.) also by a lifetime settlement, the rent to be used for apprenticing, and either gave or confirmed a 10s. rent-charge to benefit the poor.  In the mid 18th century the apprenticing charity produced �5��7 a year, said to be properly applied, though only 32s. was distributed annually in alms.  William Wright of Over Norton, presumably related to the Wrights of Middlefield Farm in Hailey, left 100 pounds to be invested for Hailey’s poor by will proved 1786; by the 1820s the income was combined with the 10s. rent-charge and with the rent (then 3pounds) from the 4 a., the whole of it distributed annually in bread.  Joan Smith’s charities were by then administered with her separate educational endowment, the trustees buying an additional acre in 1806 and receiving 22 a. at inclosure in 1824; the same year the Charity Commission ruled that half the combined income should be spent on apprenticing, and half on the school.

Hailey also received a share of Elijah Waring’s Witney bread charity, established by will proved 1815, which in 1909 distributed loaves to 408 Hailey inhabitants. Hailey’s share of George Thompson’s charity and a bread charity under the will of James Leverett (d. 1785) seem not to have been received.

In the 1940s half the combined Joan Smith charities were still used for apprenticing under a Scheme of 1906, though no applicants were found between 1947 and 1962. Total income in 1975 was over 200 pounds, with nearly 700 pounds on deposit. A Scheme of 1977 regulated the 10s. rent-charge and the John Smith, Wright, and Waring charities, which together had 147 pounds on deposit, the proceeds to benefit those in need within the ancient parish.

Labourers’ allotments vested in the parish officers at inclosure in 1853 were ruled in 1975 to be also charitable, any surplus income to benefit the poor.

INFORMATION ON THE HISTORY PAGES ARE COURTESY OF “BRITISH HISTORY ONLINE”

There are no upcoming events at this time.